History of the bernedoodle

The Bernedoodle’s first widespread appearance began around 2000, although people may have experimented with the cross earlier. They arrived about 10 years after Labradoodles. A Mini Bernedoodle breeding program began in 2003.

Goals of the Poodle cross were to infuse more intelligence and longevity into the calm and sweet-natured Bernese Mountain Dog while also trying to produce a more hypoallergenic coat.

When producing Bernedoodles, a responsible breeder chooses only the best representatives of the parent breeds. 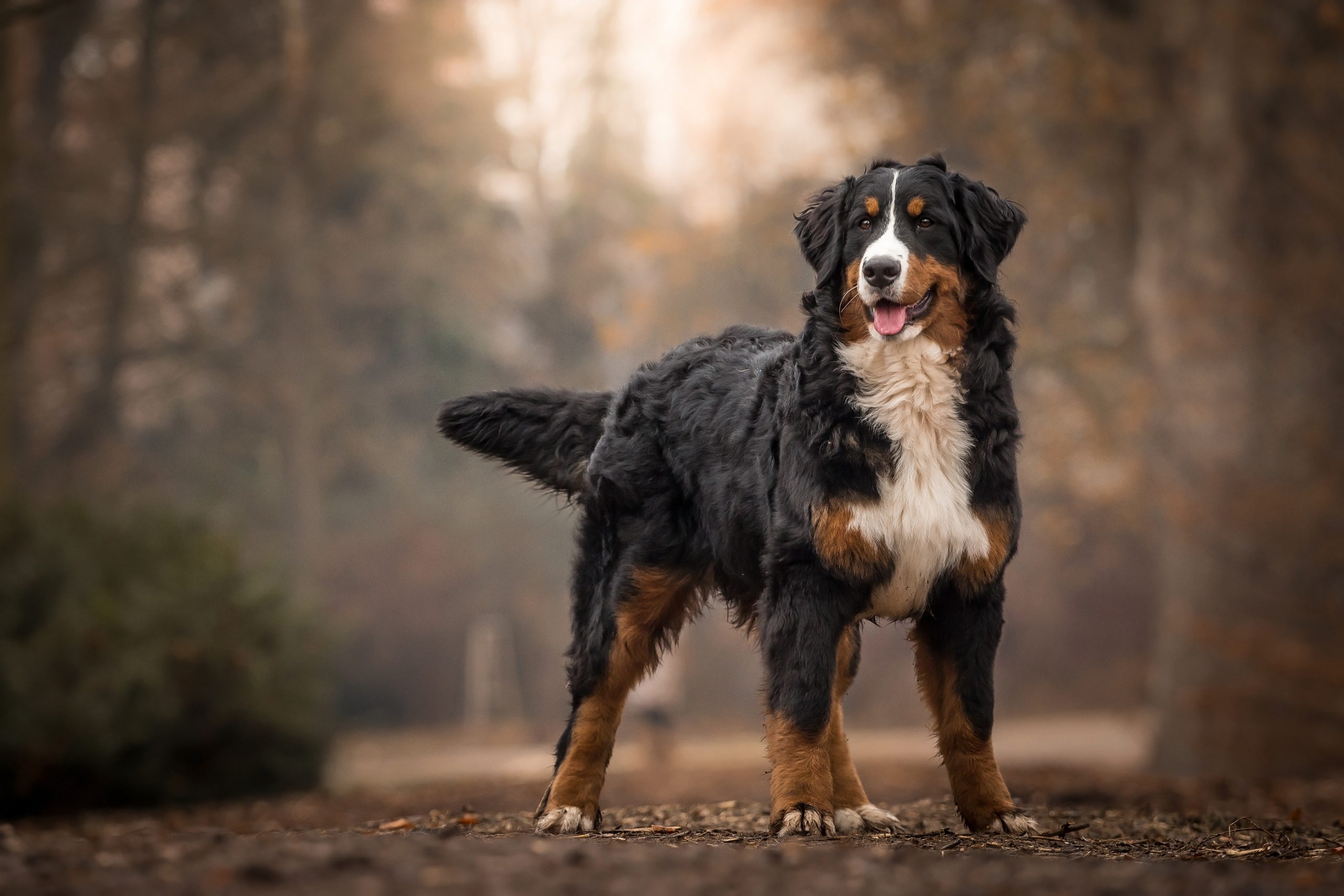 Developed in Switzerland, the original Bernese Mountain Dogs were bred in Rome from Mastiff and guard-dog hybrids. Their large size was indispensable to farmers who used them to transport produce, pull carts, and guard livestock and the home.

Bernese Mountain Dogs began to fall out of favor around 1850. It was not until 1892 that a Swissman renewed interest in the breed, and by 1907 the breed was once again firmly established in Switzerland.

The United States saw its first Bernie in 1926, and it was an AKC-recognized breed by 1937.

Bernese Mountain Dogs should give an impression of power and majesty. Their most distinctive characteristics are their large size and tri-color pattern of white, black, and russet. Male dogs are almost 28 inches tall at the shoulder and weigh up to 120 pounds. Females are slightly smaller.

A Bernese Mountain Dog is intelligent, calm, and affectionate. The breed standard calls for a peaceful dog social with other animals and having moderate exercise requirements. A BMD should be naturally cautious with unfamiliar people without being aggressive or timid.

If breeders do not exercise due diligence, Bernese Mountain Dogs can pass undesired traits to their Bernedoodle offspring. These include temperament faults such as timidity, aggression, and poor trainability. Heritable health issues are hip dysplasia, elbow dysplasia, mast cell tumors, and cardiac problems. Bernese Mountain Dogs have a life expectancy of seven to nine years. 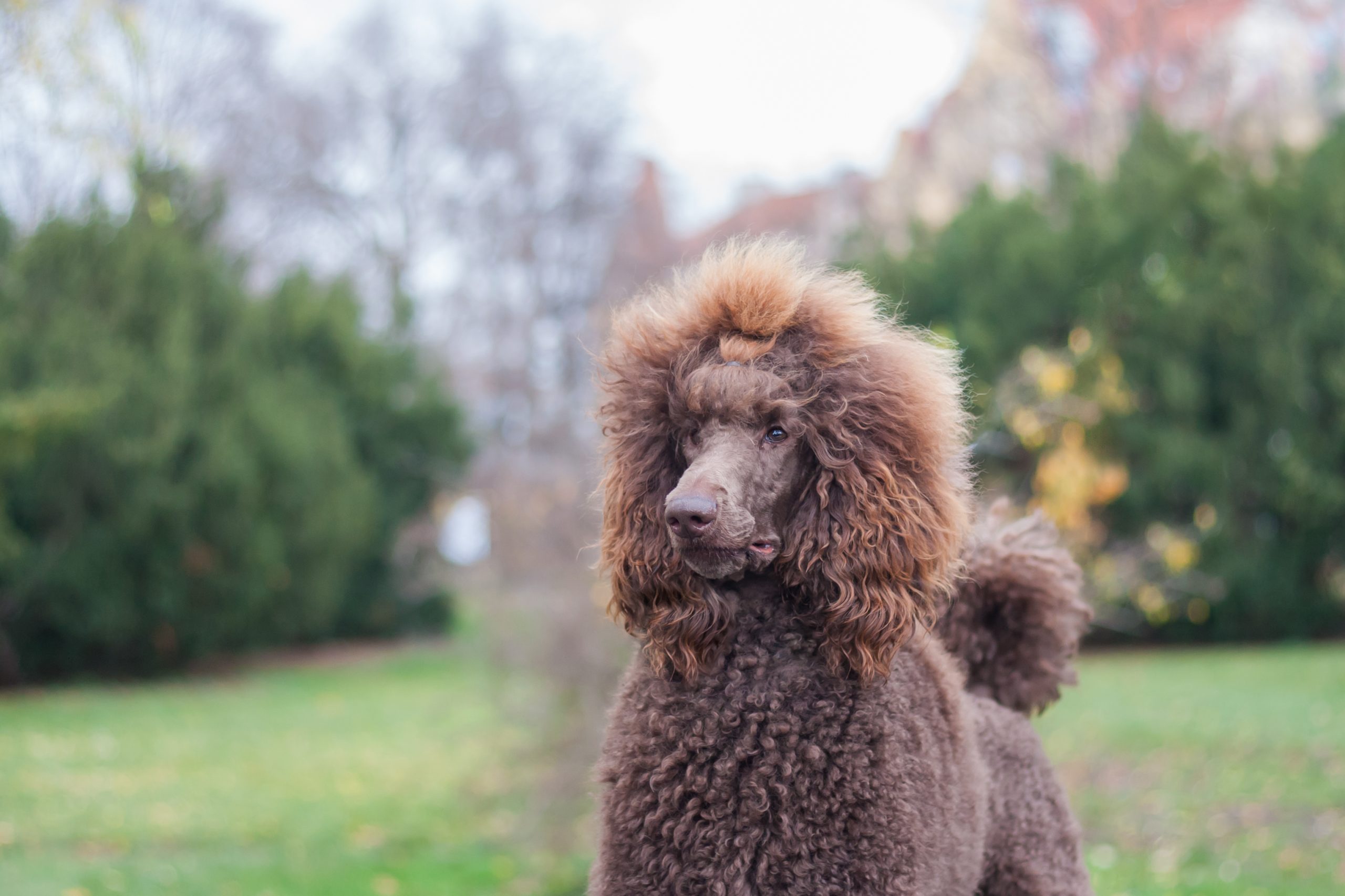 The Standard Poodle has a murky background with possible origins in Central Asia and France. Curly-coated dogs imported from Hungary, Russia, Germany, and France, were further developed into the current breed in Germany. They were principally working dogs, used as water retrievers.

Standard Poodles are medium-sized squarely-built dogs. The average dog is about 22 inches tall at the shoulder and weighs 50 to 75 pounds. Again, females are slighter in stature.

All poodles have a dense and coarse coat with tight curls. They have continually growing hair like people that sheds minimally. The hypoallergenic characters of their coats are much sought after.

Standard Poodles are highly intelligent, always ranked No. 1 or 2 among the smartest dog breeds. They have a lively nature that is playful, enthusiastic, and adventure-seeking at once. Poodles, however, can be even more cautious with strangers than Bernese Mountain Dogs, though rarely aggressive.

Poodles are susceptible to Addison’s disease, epilepsy, cataracts, hip dysplasia, and entropion whereby the eyelids roll inward. Miniature Poodles can pass along luxating patellas, diabetes, and Cushing’s disease. Poodles have a lifespan of 10 to 15 years.

Miniature Poodles, who have most of the traits of Standard Poodles except for size, are used to breed Miniature Bernedoodles. A breeder may also use a toy poodle.

Bernedoodles are not purebred dogs but they still possess unique characteristics that stamp most puppies.

Bernedoodles can blend the temperaments of their parents to varying degrees. Most Bernedoodles have moderate energy levels falling between Bernese Mountain Dogs and Poodles.

Tiny and Mini Bernedoodles have a higher activity level than toy poodles. Bernedoodles are usually calm and friendly, easily trained, and playful family-suitable dogs. Their personality reflects the goofy, charismatic, and clownish attributes of poodles blended with the steady patience and cuddliness of the Bernese.

They are also generally low-shedding which makes them appropriate for mildly to moderately hypersensitive individuals.

Bernedoodle care as pertains to maintenance usually falls between a Poodle and a Bernese Mountain Dog.

The Standard Bernedoodle is a medium to a medium-large dog with a build stockier than that of a Poodle or a Labradoodle. As described in detail below, Bernedoodles can exhibit a wide assortment of colors. Most commonly, they are bi-color black and white or brown and white. Solid black is another common presentation.

Many dog breeds you recognize today originated from hybrids.

F1B Dog – F1 dog is bred back to a Poodle or a Bernese Mountain Dog. Most of the time people will use a poodle because their priority is coat.

F2B Dog – An F1 dog is crossed with an F1B dog. Your result will be about 63 percent Poodle and 37 percent Bernese Mountain Dogs.

F2 Dog – A cross between 2 F1 dogs. This is the most unpredictable cross as far as coat and temperament are concerned.

Multigeneration Bernedoodles tend to lose their Bernese Mountain Dog color patterns and other desired traits. Therefore, breeders do not often seek F2 dogs and beyond.

Coat
Coat characteristics that breeders seek to influence most with their Bernedoodles are color and hypoallergenic or non-shedding fur.

Color
Color goals include enriching the variable Poodle colors with the striking contrasts of the BMD coat pattern.

Pattern
Traditional – refers to white color distribution that adheres to the classic tri-color BMD
Mismarked – White markings appear in traditional areas with some minor deviations. For example, an otherwise traditionally marked dog may have two white ears or solid-colored paws.
Solid – These dogs have no white markings. You can see black, chocolate, and merle dogs to name a few.
Phantom – Think of a German Shepherd or a Rottweiler. Phantom Bernedoodles have points of brown like these dogs with minimal or no white expression. Some merle Bernedoodles have brown points, making for quite a striking dog.
Parti – Large areas of white will appear in addition to the traditional markings.
Sable – These dogs have hairs with two color bands. Solid-colored hairs are lighter near the skin and dark on the tips. Sable dogs can be solid or have a traditional white pattern.

F1 dogs only have white in traditional areas with color variations expanding upon back breeding. Bi-color dogs are common in F1 litters. Tri-color Bernedoodles, what everyone wants, are the rarest in all breedings.

Traditional white applies to the distribution of white you see in a normal tri-colored Bernese Mountain Dog. You will see white on the lower third or tip of the tail, the neck, chest, and belly, and as a broad strip down the front of the face.

Texture
Yes, Poodles are extremely intelligent. However, their main selling point for most cross-breedings, Bernese Mountain Dogs included, is their non-shedding hypoallergenic hair.

The ultimate goal for a Bernedoodle is to possess a soft, loosely-curled coat with minimal shedding and dander. However, as you know, genes are not inherited uniformly. Therefore, Bernedoodles have coats that vary widely between those of their parents.

F1 puppies tend to be mostly wavy while F2B pups are the popular mix of curly and wavy to create a powder puff or teddy bear appearance. Waviness itself can be variable. A good standard is the straighter the dog’s hair the more it will shed. F2B puppies have the highest tendency to be low-shedding.

HOW BIG DO BERNEDOODLES GET?
There are three sizes of Bernedoodles and potential size variations depend on generation.

Standard Bernedoodle
The average Bernedoodle can be taller than a Bernese Mountain Dog but is typically lighter. They are 22 to 29 inches tall at the withers and can weigh between 70 and 90 pounds.

Mini Bernedoodle
The Miniature Poodle by Bernese Mountain Dog cross usually produces a dog that is 18 to 22 inches tall and 30 to 50 pounds. You will notice these dogs are the size of a smaller Standard Poodle. Genetic variation will allow Standard Bernedoodles to result from these crosses.

Tiny Bernedoodle
You can only obtain a tiny Bernedoodle from an F1B litter or beyond. Tiny Bernedoodles are 12 to 17 inches tall at the shoulder and only weigh 10 to 25 pounds. The cross is between a toy poodle and a Miniature Bernedoodle.

HOW TO TAKE CARE OF BERNEDOODLES

Taking care of Bernedoodles follows the same guidelines as caring for other breeds. Feed a high-quality dog food or raw diet that adheres to nutritional requirements and activity and weight levels. Providing shelter is also obvious. When you ask how to take care of Bernedoodles, grooming and exercise are major priorities.

Poodles need regular grooming to prevent their hair from matting while Bernese Mountain Dogs have a plush coat that you must brush frequently. The puppies can fall anywhere between.

Optimal Bernedoodle care includes both clipping and brushing. Brush your Bernedoodle daily and plan on trimming or shaving their fur every 4 to 6 months. Professional groomers can either give your Bernedoodle a standard clip or groom according to your specifications.

Tiny Bernedoodles do not require much space but require the most exercise out of all of the variations. They are likely to be even more frivolous than toy poodles.

Standard Bernedoodles require less exercise than Poodles but more than BMDS. Their coats are usually not as thick as a Bernese Mountain Dog’s, so you typically do not have to worry as much about heat exhaustion or heat stroke. 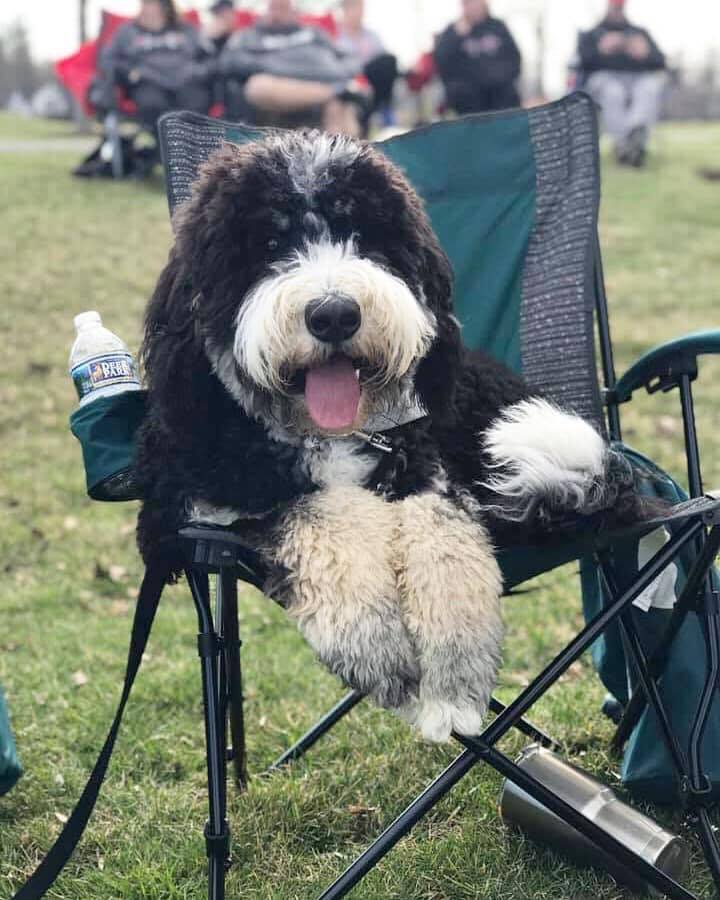 Standard Bernedoodles have an average lifespan of 13 to 15 years. Mini and Tiny Bernedoodles live 14 to 17 or 18 years.

Bernedoodles seem to enjoy hybrid vigor, a phenomenon of health and vitality that exists in the offspring of parents whose genetic lines are far apart.